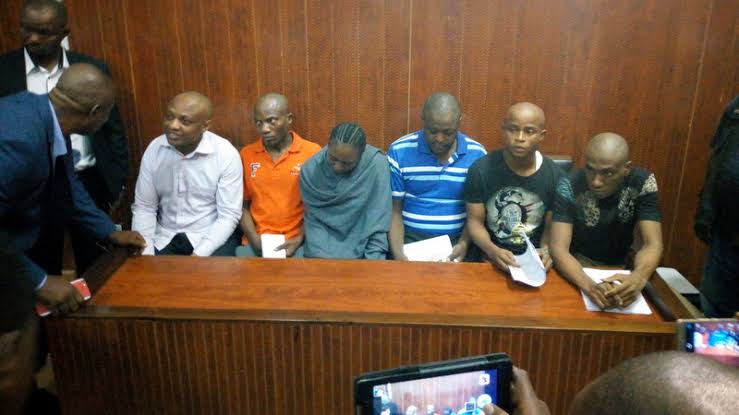 Ifeanyi and Aduba made the denials during the resumption of their trial at an Ikeja High Court over two counts of kidnapping and conspiracy.

The ex-soldiers, who had earlier been dismissed by the Nigerian Army, are facing trial alongside Evans, Uche Amadi, Okwuchukwu Nwachukwu and Ogechi Uchechukwu for the alleged kidnap of the Chief Executive Officer of Maydon Pharmaceuticals, Mr. Donatus Duru.

Ifeanyi, led in evidence by defence counsel, Mr. A.A Uzoukwu, said that he was acquainted with Aduba and had worked with him as a soldier.

He said that one day, he was requested by another acquaintance, Mr. Ikenna Chukwuma, to help him drive a car from a mechanic’s workshop at Ijesha to Surulere, both in Lagos State.

He told the court that when they got to the mechanic’s workshop, the car had not been repaired and Chukwuma had called a friend to pick them up from the workshop.

“When I entered the vehicle with Chukwuma, I saw Mr. Victor Aduba (sixth defendant) in the vehicle and there was a weapon inside the vehicle.

“When I asked what the weapon was doing there, the driver told me to keep quiet and mind my business.

“I was asked if I knew what an AP was and I said no. Then I was told to keep quiet and mind my business.

“My Lord, they did not carry anybody in that vehicle and they did not kidnap anybody. Reaching Cele Bus Stop, I told them that I was uncomfortable and asked to alight.

“I was dropped off at Cele Bus Stop and they warned that if they heard anything from me, they would kill me and I went back home,” Ifeanyi said.

Responding to questions from Evans’ defence counsel, Mr. Victor Okpara, Ifeanyi said that he did not know Evans, that he only met him for the first time in Police custody.

“I have never taken part in any kidnap activities in my life. I have never attempted to kidnap anyone before or conspired with Evans to kidnap the victim (Duru),” he said.

Under cross-examination by the lead prosecutor, Mr. Adebayo Haroun, Ifeanyi said that it was a locally made weapon he saw in the vehicle and he did not know the reason why he was warned not to reveal what transpired.

The second ex-soldier, Victor Aduba, denied partaking in kidnapping with Evans and the other co-defendants.

He alleged that he was tortured into admitting to the crimes by members of the Intelligence Response Team of the Nigerian Police.

Led in evidence by his counsel, Mr. Emmanuel Ochai, Aduba said he was invited by an acquaintance, Mr. Chukwuma Nwosu, to a bar in Ago Palace, Lagos, but unknown to him, Nwosu was wanted by the Police.

“As I reached the bar, he (Nwosu) was acting unusual and I kept asking what was wrong with him, and then I noticed five policemen who approached me and said I was under arrest.

“I resisted and they overpowered me and when I got to the Police station, their boss, one Mr. Philip, said that I should cooperate with them and do whatever they say I should do.

“I told them they should allow me to go to my office where I worked as a soldier, but they refused,” he said.

Aduba said that he was ordered by a member of IRT, Insp. Idowu Haruna, to sign a written statement admitting to the crime, but he refused.

He alleged that he was ordered to be taken to a “theatre” by Mr. Phillip, where he was beaten and was cut with a machete by Haruna.

Aduba showed his alleged machete injury to the court during his testimony.

You May Also Like: $5m Fraud: How Businessmen Used Citi Bank, FIRS Documents To Defraud Foreigner

He alleged that in the days he was in custody, three men, Felix Chinemeren, Paul Samyan and Chukwuma Nwosu, who were initially paraded to the media as kidnappers, were extra-judicially killed by the IRT team.

“I was still being told to sign some papers but I refused and they said if I refused, I will travel (slang for killed). At that point, Idowu Haruna brought out his phone for me to look at some pictures.

“When I looked at it, I discovered it was the dead bodies of the three men with whom I was in custody. That was how I was forced to sign the papers,” he said.

To corroborate his claims, Ochai, Aduba’s counsel, tendered to the court a record of court proceedings of a kidnap trial held on November 5, 2018 before Justice Oluwatoyin Taiwo.

In the records of proceedings, Haruna had, in his testimony, admitted that the three deceased had died in Police custody.

Aduba in his evidence vehemently denied working with Evans.

“On February 14, 2017 (the day of Duru’s kidnap), I was on a 24-hour duty at Abati Barracks gate. I even told Insp. Idowu Haruna to check out my alibi, but he said it was none of his business.

“I have never conspired with anybody, neither have I gone with anybody to kidnap anyone,” he said.

While being cross-examined by Haroun, Aduba said that he was enlisted by the Nigerian Army on August 15, 2009 and had known Ifeanyi since 2010.

He described Ifeanyi’s evidence that he conveyed him in a vehicle with a locally made weapon as “a fabricated story.”

Aduba denied Haroun’s allegations that he was one of the soldiers who Evans had in a recorded confession, admitting to be members of his gang.

Haroun also noted that in the records of proceedings of Justice Oluwatoyin Taiwo, Haruna in his evidence never said that he traveled (killed) anyone in his custody.

The prosecutor noted that Haruna had, in his evidence, said that the three men had died in the custody of the Police at Ikorodu General Hospital.

Responding to questions from the prosecution, Aduba said that he was never dismissed by the Nigerian Army over allegations of kidnapping.

“The charges against me by the military was that I was AWOL. I was never given the chance to challenge my dismissal by the Army,” he said.